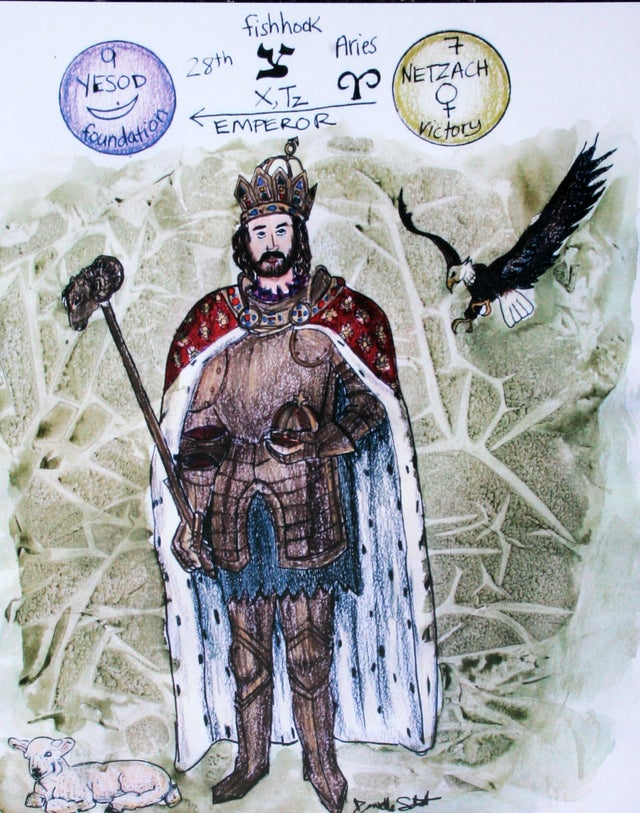 This is an 8"x10" print from my Qabalastic Major Arcana Deck. The Kabbalah or "Tree of Life" is a map of the pathways to spiritual enlightenment. The symbols at the top of each card show the connected spheres to each path (tarot illustration) and can provide more meaning.

This is the Emperor Card. The Emperor represents a person who has strategically made choices in their life that help them build their life goals and tasks. This could look like someone carefully investing in themselves on a physical, mental, and or spiritual level.

In this illustration I have chosen to illustrate Otto the Great, who was the most powerful western European after Charlegmagne. He organized a strong German state and expanded his authority over Burgandy and Italy. I have also included symbols such as the Eagle that show spiritual authority and mental strength. A lamb resides at his feet to show that he is still a human being and therefore physically vulnerable to the world. I added a rams head to the scepter to show Aries energy and a Mars symbol to his crown to show Mars energy. His cloak shows golden bees that represent that only through his hardwork and dedication did he get to his level of authority and power.